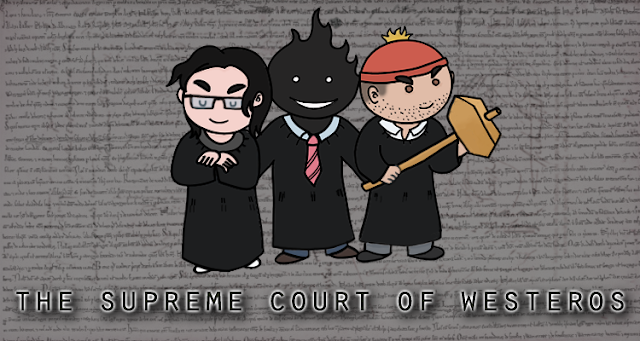 Thursday is court day!
Welcome to the Supreme Court of Westeros! Every week, three pressing questions from the community will be answered by the esteemed judges Stefan (from your very own Nerdstream Era) and Amin (from A Podcast of Ice and Fire). The rules are simple: we take three questions, and one of us writes a measured analysis. The other one writes a shorter opinion, either concurring or dissenting. The catch is that every week a third judge from the fandom will join us and also write a dissenting or concurring opinion. So if you think you're up to the task - write us an email to stefan_sasse@gmx.de, leave a comment in the post, ask in the APOIAF-forum or contact Amin at his tumblr. Discussion is by no means limited to the court itself, though - feel free to discuss our rulings in the commentary section and ask your own questions through the channels above.
One word on spoilers: we assume that you read all the books, including the Hedge Knight short stories, and watched the current TV episodes. We don't include the spoiler chapters from various sources in the discussion, with the notable exception of Theon I, which was supposed to be in "A Dance with Dragons" anyway.
Question Call: If you have any interesting questions, please tell us!
Please note that our new ebook is up and available on Amazon, collecting the first 60 rulings and the best comments in one place. It's only 5,99$, so what are you waiting for?
And now, up to ruling 123! Our guest judge this week is FTWard (Thomas), is a sellsword, black of hair and heart. He's a member of the APoIaF community who carries the banner of Team Stannis and specializes in minor opinions. @F_T_Ward on Twitter.

Did Robb send Roose to Harrenhal in full knowledge of the curse? Surely Robb knew that Roose was a danergous man and he could rid himself of a future problem, given what had happened during the Hornwood Affair?

Main Opinion: Amin
No, I don’t think that is the case. Robb trusted Roose too much, despite being afraid of him. He wasn’t playing some high level game of setting Roose for that purpose and Robb wouldn’t rely on a curse. If he distrusted Roose later on due to interrim events, he could have relieved him from command or tried to deal with Roose in various other ways.

Concurring Opinion: Stefan
No one believes in this kind of stuff. Think about the way people usually talk about the curse. Roose Bolton only believes in it because of the book he read. That doesn’t mean, of course, that the curse isn’t real - it most certainly is. But for Robb to believe in it and actually found his political and military strategy on it is beyond unbelievable. This is Ned’s son, after all! And even if he did - he didn’t send Roose to Harrenhal. He sent him to hold the ford. No one anticipated the castle to fall to Bolton.

Concurring Opinion: FTWard
I assume Robb is well educated in southron history by Maester Luwin. I don’t think though that there is any reason to believe that Robb puts much stock into curses or the supernatural. I think that Robb views Roose as a powerful Lord who needs to be carefully managed. I do not think that Robb is plotting to remove him.

Final Verdict: No, Robb was unaware of the curse.

Why does Dany want to conquer Westeros, now that she knows she’s barren? There can’t be a Targaryen line, after all.

Main Opinion: Amin
Dany is entitled, albeit no more than other nobles, and she believes it is her right to rule Westeros. He dragons are her children now, so whoever she pairs up with 2 of her dragons will have the best chance to stay in power if something happens to her. She also didn’t go to Westeros when she had the chance in the end of A Storm of Swords, so she may be moving beyond the idea of just entitlement to realize that she can help make the place better, or at least try to do so, while taking responsibility for her actions.

Concurring opinion: Stefan
Dany trying to conquer Westeros is her flaw, and one that she ultimately needs to overcome. The Game of Thrones is a distraction from the true enemy, who is north rather than south, where Dany is about to strike. The question is how much blood and strength will be squandered before she realizes this (and the rest of the continent as well). Justice Amin speaking of “entitlement” really cuts to the case.

Concurring Opinion: FTWard
"Remind your Good Master of who I am. Remind him that I am Daenerys Stormborn, Mother of Dragons, the Unburnt, trueborn queen of the Seven Kingdoms of Westeros. My blood is the blood of Aegon the Conqueror, and of old Valyria before him." In a word - Entitlement. Dany is " the blood and seed of Aegon the Conqueror." In her mind, it is both her birthright and destiny to sit the Iron Throne and avenge her family against the Usurper and his dogs.

Final Verdict: Because she thinks it's her destiny.

Looking back or forward are things Daenerys tends to avoid. Both Ned and Tyrion relied far too heavily on Littlefinger (the latter despite his suspicions). What would have happened if one of them had discovered his plotting and imprisoned him?

Main Opinion: Amin
If Ned imprisons Littlefinger early on, he might not end up losing in King’s Landing. The question remains who will the Goldcloaks follow? If Ned continues on to replace Littlefinger with someone he can trust to deal with the gold cloaks (i.e. bribe them) and/or replace the gold cloak commanders, he can be succesful in King’s Landing. If he simply imprisons Littlefinger and that is it, then agian whowever gets in the position to fund/bribe the gold cloaks holds the power over them, to a certain extent, though it is best to butress that influence with other forms of legitimacy. Tyrion imprisoning Littlefinger early on could lose them KL if they don't send someone competent enough to negotiate with the Tyrells. As for Tywin imprisoning Littlefinger, that doesn’t affect much as presumably Joffrey is already set to die or is dead, and Tywin dies from Varys’ meddling, not Littlefinger. However, Littlefinger has been actively or least inadvertedly putting the debts and the ecomony in a dangerous, which cause an economic crisis even while he is in jail.

Concurring opinion: Stefan
If Ned doesn’t rely on Littlefinger and instead makes use of his royal authority by discarding Slynt and maybe some of his underlings, he can easily take control over the Gold Cloaks by appointing Rory Cassel as their commander. Rory could easily find a core of 50 reliable guys who then help the palace coup, despite Littlefinger’s machinations with the rest of his underlings. At the very least, the Gold Cloaks aren’t as reliable a tool as in OTL. Tyrion, in contrast, doesn’t rely on Littlefinger all that much. He sidelines him, and Littlefinger is worming his way back in power only by negotiating the Tyrell deal, outside King’s Landing, so there’s not much change to be had there.

Concurring in part, dissenting in part: FTWard
I think you asking Ned to be someone that he is not. For Eddard, the Lannisters are the issue not Baelish. I have a difficult time imagining a scenario where Ned discovers the full truth about Littlefinger before Littlefinger is able to neutralize Ned. Tyrion is arrogant and never considers the possibility that he isn’t the smartest person in the room. That is fine as long as the other person is Pycelle or Slynt or Cersei. When it is Olenna or Tywin or Varys or Baelish, not so much. They consistently outmaneuver him. Tyrion thinks that he can out play Littlefinger but he is just a rabble (Cyvasse) to the real players.

Final Verdict: Much difference for Ned, not so much for the Lannisters.
Posted by Stefan Sasse at 7:30 AM